Now this is where the real fun begins.....You will find some amazing stuff here. Warning: after digesting this stuff you might have the sudden urge to burn all the history books in existence today.  Just look at the header of this article. *What do you see* ? This is NOT just a made up picture here. This is actually found in Palenque, Mexico.  That makes one wonder doesn't it? I am going to introduce you into the world of "Out Of Place Artifacts" (ooparts). Again in my early teenager years i was confronted with ooparts and the wonderous world surrounding them. In those days one of my favorite songs was Metallica's 'The thing that should not be'.The reader should bare in mind that there isn't a lot of TRUE ooparts photographic evidence. There are 2 main reasons for that. First "they" don't want you to know. (for many reasons). The second reason being that a lot of these finds were done in times the photocamera was not common good or didn't even exist yet.What i am about to show you is what IS out there and genuine. There is also al lot of bogus crap. But this is the real oopart story. Comments are mine unless said otherwise. Nexion2"Are we missing something?" This little thingy (and many more of them) were found during excavations in Saquarra, Egypt. One could easily see an airplane in that or indeed a bird. But there's more to it. It is known to archeologists that the Egyptions made models of everything they made. Also there has been attempts to reconstruct these things and guess what; they fly perfectly.Comment:" While excavating an Egyptian tomb, near Saqqara in 1891, investigators came upon a small, birdlike object made of sycamore wood. ..and like the rest of thetomb's contents, dated to at least 200 BC. Little more thought was given to the matter until almost 80 years later, after the Wright brothers had made their landmark flight and ushered in the era of modern aviation. To the next generation of Egyptologists, the birdlike artifact looked uncannily like an airplane. The resemblance was so striking that a team of aviation experts was assembled in the early Seventies to explore this hypothesis. Their study revealed that the 5.6-inch long body was aerodynamically sound. In fact, one aeronautics engineer noted a remarkable similarity between the Saqqara bird and a new, oblique-winged aircraft that NASA planned to build. And when the tiny wooden relic was subjected to the ultimate test -- a flight trial -- it soared through the air with the ease and grace of a modern-day glider.To the experts, the conclusion was inescapable: The 2,000-year-old object was a model airplane.".... But there have als been found "airplanes" in South America. Keep digging. Here's another one! What went wrong here? What do we miss? Is it our distorted view about our real history, our misunderstanding about nature an how rocks are (supposed to be) formed? Nexion2."This ancient tool has a simple form, similar to the type of hammer that is still common in Germany today. The handle now is a very hard petrified crystal with an intact structure. It was possible to ascertain that the interior of the handle had partly turned into porous coal.

There is no way to scientifically explain this combination of carbonization and petrification. I have not heard of a similar piece, found anywhere in the world. Two very different processes must have occurred simultaneously or in short succession. Crystal petrifaction requires an ecosphere of running water whereas for the development of porous coal, one could, for example, assume that fire was the necessary agent. Water and fire, it goes without saying, are two very different and mutually exclusive elements.

The analysis of the subsiding of the Flood, to be undertaken at a later point in this book, will explain what now looks like a contradiction. The outer layers of the hammer handle reminded me of the petrified stumps and piles of wood I had seen earlier at the "Petrified Forest National Park" in Arizona, on a visit in 1988.

The exhibits there, pieces of the cut up piles of wood, had completely petrified and displayed a homogenous crystal structure. I do not know of one piece discovered in that park to contain a coal interior comparable to that of the fossil hammer. The age of the trees there is officially estimated at between 100 and 200 million years.

Wood petrifies when it is buried in silt deposited by flooding rivers or seas and silicates, such as are found in volcanic ash, dissolve and impregnate it. These substances replace the hydrogen and oxygen portions in the wood and begin the petrifaction process by silicification. This may produce very solid opal or quartz minerals. The final product is approximately 5 times as heavy as common pine wood.

This short description of the hammer handle should make it obvious that the fossil hammer must be authentic and very ancient. In spite of all our modern technical abilities, it has never been possible to produce petrified wood with porous coal inside.

It therefore is out of the question that such a hammer could be a hoax. I must clearly emphasize this point, as most artifacts which contradict the accepted view of the world we are accustomed to, are accused of being forgeries. Our traditional

schools of thought, however, are at a loss to explain this hammer.     Want strange??..... "20,000 to 100,000" Year Old Metal "Screws" Thousands of spiral, screwlike objects sized as small as 1/10,000th of an inch have been found beginning in the early-nineties and are still being found by gold miners in the Ural mountains in Russia. These metal items found in depths from 3 to 40 feet are thought to be 20 thousand plus years old. Dr Matveyeva who has studied the objects: “The layer which contains the spiral shaped objects is characterised as gravel and detritus deposits … From their orientation these layers can be dated to 100,000 years and correspond to lower regions of the Mikulinsk horizon of the upper Pleistocene.” In plain language the Pleistocene is the previous geological epoch, which began about 2 million years ago and ended around 10,000 years ago. Contrary to what some commentators believe however, we don't think that these objects are extraterrestrial in origin. Rather we think their origin is very terrestrial, the vestiges of a former hi tech civilisation, the evidence of which will become increasing apparent over the coming years. So yeah there you go for starters. And there is so much more. This is exactly the where Fear Based Denial starts. Looking at this stuff forces to let us think out and beyond our known parameters. Obviously we are something missing and regardless we will ever find out WHAT the Hell that is we still have the same new fact that what we have learnt doesn't hold water. THAT in turn means that the very basis of your existence is WRONG!. Weather you agree with it or not! It's still WRONG. Here's some more! Nexion2  Superfine Holes in Precious Stones & Superfine Thread These ancient objects and more besides present at least a three fold problem. How was this super fine thread created in the first place? How were these superfine holes created through extremely hard precious stones without damaging the stones. How were the jewelers able to see these virtually microscopic threads and holes without a microscope or similar instrument? These extremely minute bead balls (top)are the remainder of a necklace which is excavated from an Incan ancient tomb which is located in Lima Peru. The fact that such a minute hole is bored through this brittle shell material of 3 mm thickness is not possible even with infinitesimal workmanship technology of today. Originally it means that the super superfine thread was passing as many as 6 to the groove. The problem is what method was used to produce that much micro-thin thread? A thinness of 140 counts (the thinness which with 1 g reaches approximately 283 m) is possible with cotton spinning technology of today, but as for this super superfine thread, it reaches at the highest as many as 250 counts. The first problem was drilling superfine holes in a brittle material without damage--the second object (bottom) presents a different problem: the mummy which is excavated from a Peruvian graveyard.The mystery is the means utilized for boring the superfine holes through emerald. Diamonds are designated as hardness 10, the emerald is hardness 7. Only the ruby and the sapphire and the diamond of hardness 10 are harder than emerald. Neither the diamond, the ruby or the sapphire were known to the Andean ancient civilizations. Today, high frequency induction heating could be used or a method such as laser beam, but as for the ancient Andean to whom these artifacts are assumed to belong, no means of accomplishing the high tech, microscopic drilling or manufactoring the thread is known.Hidden Messages in Genesis?
Science Frontiers Online Some can find cryptic meanings in the works of Nostradamus, others see messages in crop circles. Forget those sources! A better one has been around for millennia. Three researchers at the Jerusalem College of Technology and the Hebrew University have analyzed the text of Genesis using an analytical technique that can only be called "inspired". "By treating the text as an unbroken string of letters, and selecting sequences of equally spaced letters, three mathematicians discovered 300 hidden pairs of Hebrew words with related meanings in close proximity to one another. Some of the words involved people who lived and events that occurred long after the Torah was written.  "The odds of the words occurring by chance? Less than one in 50 quadrillion, according to an article by Jeffrey Satinover in the October issue of Bible Review."

Satinover is a psychiatrist and lecturer on the relationship between science and religion. He commented: "I guess the bottom line is, if the research holds up and no flaw is found in the methodology, then I think the implication is clear that the authorship of Genesis is not human." Unsettling though the implications are to mainstream science, the research has made it past the usual critical hurdles into two scientific journals

tatistican Science  and Journal of the Statistic Society. Scientists familiar with the work can only say that, "Something weird seems to be happening." We certainly agree!  This link is dedicated to Permuter0.  Well that's it for me for now..........much of the information here is derived from this website and thanks for making it freely available. Many thanks. Nexion2. "Never stop wondering"
Omhoog

Lekkerrrrrrrr topic, and thanx for the link 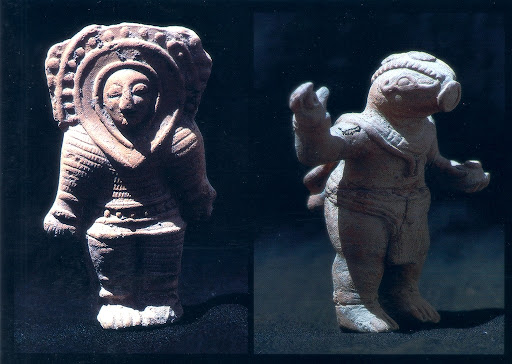 It is me it is you it is us it is we.
het is niet wat het lijkt,... het is veel erger
Omhoog

illuminati of my own reality
Omhoog
Plaats reactie
208 berichten