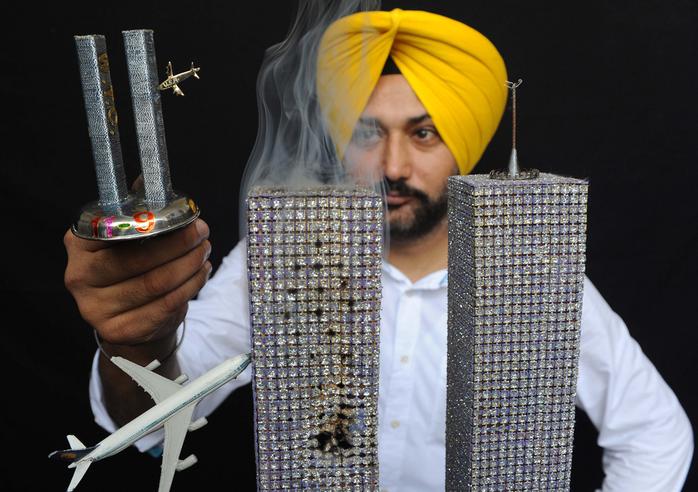 Enter The Phony 9/11 Narrative - And Quickly.

On this blank, highly suggestible traumatized mind was immediately imprinted the narrative by a thoroughly complicit media:

2. "It was outside terrorists!--the ones we've been telling you about! Muslim terrorists did this despicable deed."

3. "We must attack back to defend freedom! Our bastion of freedom must now root out terrorism everywhere!"

4. "There will be sacrifices. To protect you we're going to have to limit your freedoms...all in your best interest of course."

Was the ruptured "Great Spherical Caryatid" sculpture at the twin towers foreshadowing the 9/11 "event"?

Blowing out the pillars symbolizes, rightfully so, bringing down the house as in the Samson in the temple of Dagon illustration at the top. In the case of the WTC Twin Towers, they represented the international financial world system, as was proudly emblazoned on the world's psyche since they were opened in 1970-72. Dedicated to the Rockefeller brothers, high ranking Illuminati freemasons, the iconic picture of these towers adorned more paraphernalia and received more multi-media exposure than virtually any modern architectural image.

When these literal icons/idols of society disintegrated before everyone's eyes, the psychological fabric of America and much of the world was rent in two. Not only at a conscious level, but as explained above, this is also at the vast collective subconscious level, which is even more powerful, shredding a timeless symbol laden with esoteric meanings and associations held deep in the soul.

Hyper State control as a political tool uses psychologically coercive techniques in order to indoctrinate subjects. The end justifies the means to form an elitist, totalitarian society. If you make a person behave the way you want, you can make that person believe what you want. Hyper-State control techniques are based on the same principles as mind control techniques studied in social control systems of cult groups and social bodies in general.

Creating anxiety and fear, inducing states of high suggestibility and controlling relationships to assure loyalty and obedience are standard management techniques of the social body.

Desensitization through language abuse, propaganda and junk-information, as well as the elimination of individual ideas through repetition of chants and phrases or the inducement of dependence by introducing sports, games or TV shows with obscure rules, are part of a large set of social styling methods. Pumping up disorientation, susceptibility to emotional arousal is increased by depriving the nervous system through special diets of junk-food, prolonging mental and physical activity and withholding rest and sleep.

((Psalm 46))
illuminati of my own reality
Omhoog

Kots!
:sick:
“In individuals, insanity is rare; but in groups, parties, nations and epochs, it is the rule.” ~ Friedrich Nietzsche ~
Omhoog

The last half of the word Methuselah is selah, a word which appears 74 times in the K.J.V., as another link between 1938 and 74. Selah mostly appears in Psalms, commonly linked to David. Selah is a signature at the end of Psalms 46. Count 666 chapters from the end of the Bible and come to Psalms 46.


Count 46 words from the front of the Psalm. The word is shake. Exclusive of the signature word selah, the 46th word from the end of Psalm 46 is spear. That is how we are told that Sir Francis Bacon, the real author of the works credited to Shakespeare, also designed the Pyramid Prophecy in the K.J.V. Bible.

http://www.davidlane1488.com/pryamid3.html
illuminati of my own reality
Omhoog
Plaats reactie
24 berichten